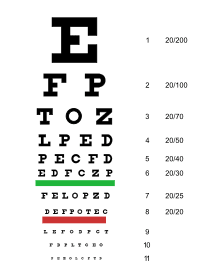 Dr. Chanda Wall contacted me to develop a new brand for her because she was starting a new business at 8432 Lockwood Ridge Rd in Sarasota, FL 34243‎. Her services are: Optometrist and optical services providing eye exams, glasses and contacts.

In experimenting with concepts for a logo I decided to investigate if there was a font I could purchase that was as close as possible to an old eye exam chart. While some newer eye exam charts are a san-serif font the old Snellen charts used unique geometric serif lettering (not a font). I found several fonts that were similar to the lettering but none that were “close enough” until I found a post that suggested a font called “Stymie” which fit the bill. Stymie is fairly unique because the uppercase “E” has a vertical serif at the end of the center crossbar. This feature made the font stand out. Some old eye charts show the vertical serif at the end of the cross bar and others don’t.

I experimented by drawing several different frames to go with the font because I wanted a visual element that said “optometrist” in addition to the impression created by the font. Inspired by the Snellen Eye Chart, I decided to add a red cross bar reminiscent of the red cross bar in the eye chart. Even though I could have easily offset the lettering to match the weight of the lettering in the eye chart I chose to keep the original weight for legibility and the similarity of the lettering is so strong it wasn’t necessary.